The Federal Government’s claims of a record health budget don’t stand up to close scrutiny because funding is actually falling on a per-capita basis, health economists say.

In its budget analysis, Macquarie University's Centre for the Health Economy (MUCHE) warns that while the budget has no short-term losers, it has deferred the reforms and investment required to cope with an ageing and expanding population.

Medicare funding will rise by $4.8 billion as part of what the Minister for Health, Greg Hunt, described as a $414.5 billion investment in health, aged care and sport.

But according to the MUCHE analysis, this only represents a 2.1% increase on nominal health spending compared with the 2017/18 budget.

And after accounting for inflation, spending will increase a full 1% below the rate of population growth until 2022, the economists estimated.

“[It] means less money will be spent on a per capita basis,” the report said.

MUCHE director Dr Henry Cutler (PhD) said it was realistic to expect that health outcomes would decline as a result.

“It is actually likely to be worse than what the report shows, because this doesn’t take into account the additional cost that is coming as we see a wave of baby boomers enter the phase where they need rapid increases in healthcare,” he told Australian Doctor.

The economist stressed the government was not technically being dishonest about its figures.

“Everything Greg Hunt says is true, but at the same time, this budget is about not offending any stakeholders and trying to meet a broader goal of getting to a surplus, which is why it is so sedate,” he said. 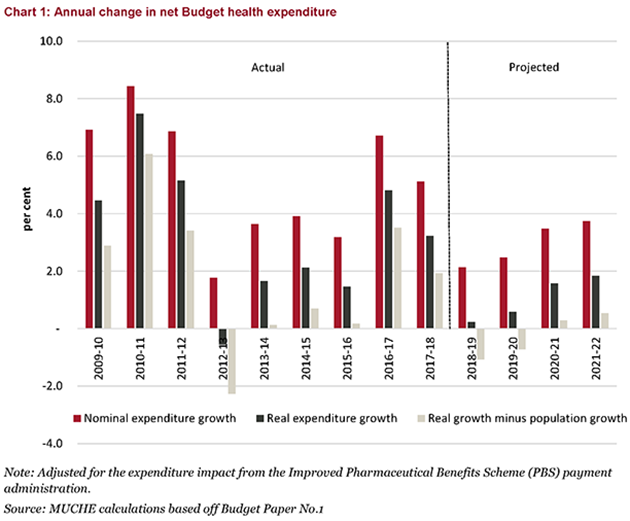 However, the report also cast doubt on the supposed generosity of the government’s aged care announcement of 14,000 new home care packages.

The $1.6 billion initiative will be funded by a 26,700 reduction in projected residential aged care places, the report states.

“Overall, the budget for health and human services is sedate. No real winners and no real losers,” the report said.

“The courage to make real change to improve the wellbeing of Australians has been deferred for a future government.”